Home > Customer Service > Chatbots and artificial intelligence: where do we stand? 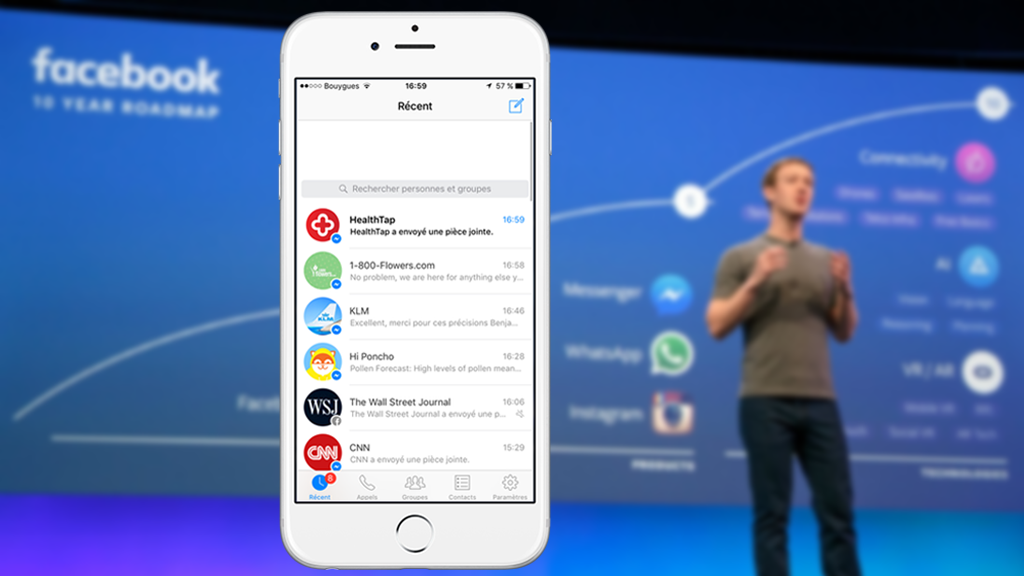 The tech world’s spotlight turned to chatbots after Facebook announced the launch of their own bot store on the Messenger platform at the F8 conference in April 2016. A few weeks later, the news has been covered extensively. It has also generated a lot of criticism. The two main arguments against are that this is nothing substantially new and that chatbots give only approximative answers. These hasty criticisms are due to the fact that most people haven’t quite grasped the real concept behind the Messenger bot store. Here are a few key elements that will complement the F8 announcements.

So what is a bot?

Chatbots are computer programs that are able to read messages (emails, text messages, chat conversations etc.). They can answer these messages within a few seconds thanks to a set of pre-recorded messages. In this respect, chatbots are not a recent invention. In 2001, a company called ActiveBuddy launched SmarterChild, a bot for AOL’s Instant Messenger, MSN Messenger and SMS. With this bot, just like with Poncho these days, users could send a request to get information about the weather, news, cinema times and the bot would provide them with the information. This bot was downloaded more than 30 million times.

30 million times is 30 times less than the current 900 million active Messenger users, without counting the other messaging apps which are going to follow the conversational commerce trend. Therefore, the integration of bots within Messenger is a huge opportunity for brands to establish a conversational relationship with their customers.

Bots are semi-autonomous entities. They follow the rules designed by developers.
In other words, bots carry out independent actions that are largely based on the if this, then that principle. Chatbots are to be found in a huge range of sectors. Therefore, we can divide them into several categories: entertainment bots, commerce bots, news bots, utility bots and customer service bots. Nothing new there, bots are not an innovation as such. What is making them more efficient today is the artificial intelligence increasingly integrating within the technology.

Read more: [Press Review] What will bots change in our customer experience?

The robot fantasy: not a reality yet

“We need to add more natural language processing, and that’s what we’re working on right now.” Sam Mandel, the CEO of Poncho

For example, Facebook offered access to their bot store in beta test to the Poncho service. This service launched their first weather bot on Messenger. The example below shows that Poncho only answers specific questions like “Do I need …?”. 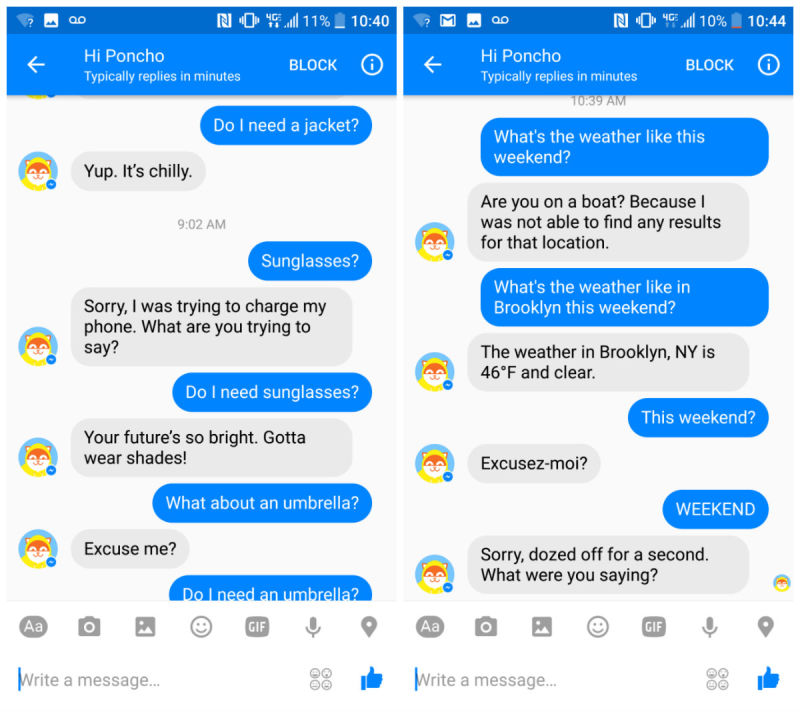 This chatbot does not seem to be very smart because it doesn’t understand everything it is asked. Of course, it’s not a surprise because developers haven’t integrated artificial intelligence within this bot.

It’s obvious we fantasize about robots as much as we fear them. Our vision of this kind of project is biased by the current trend of movies and tv series about humanoids: Terminator, Iron Man, Her, Humans etc. These programs illustrate more advanced levels of artificial intelligence than we are currently able to provide.

Artificial intelligence vs chatbots: what is the difference?

There is usually a bit of a confusion between the concepts of chatbots and artificial intelligence. Right now, when people talk to a chatbot, there is a false perception that it will be like talking to a human being. They forget one thing: it’s a machine without no hint of intelligence! If and only if we add artificial intelligence to these chatbots will we be able to get closer to a human experience. But there’s still a long way to go before we achieve this.

As David Marcus (VP of Product for Messenger) explains, this confusion comes from a general misinterpretation. Consumers expect highly sophisticated artificial intelligence. But, in reality, the Messenger bot store only provides a new bot interface. This interface is very intuitive for people who are not tech savvy. This is in itself a huge technological move:

“There’s a definition of what bots are in people’s minds, and what they’re thinking of and what we built is something different. Because bots in the minds of most people are this command-line interface type of thing, where it’s pretty low fidelity, it’s all command-based. And it maybe resonates with us geeks, but it doesn’t with most people. And so what we’ve built, we feel, is a more consumer-friendly, mass-market version of that.” David Marcus -VP of Product for Messenger @Facebook

The progress of artificial intelligence will boost the explosion of bots to complement human support. This is part of the conversational commerce trend. iAdvize has been working on this type of project for some time now. Thanks to the synchronisation of Nuance and iAdvize, a virtual agent offers a first level of efficient customer service to Numericable customers. This agent answers the most frequently asked questions and guides customers towards the most suited service to meet their demand. If need be, a professional agent takes over to give more accurate and personalised answers. Therefore, the virtual agent focuses on simple, “low value” questions. It enables professional agents to focus their attention on questions where they will really make a difference, and add value.

Human beings remain at the heart of conversational commerce

As previously said, bots are semi-autonomous entities. On the other hand, artificial intelligence has to be trained and guided by humans. For example, a team of agents is dedicated to training and supervising Facebook M. Players of messaging bot services point out that currently, 20% of conversations can be completely automated, 50% are supported by humans in charge of validating or correcting answers offered by bots and 30% of them are handled by humans alone.

Let’s take the example of Voyages-sncf.com, the first website in France to use Messenger! The leading online travel brand in France doesn’t use a chatbot to interact with their customers on Messenger. However, they automate some messages such as order confirmations.

As soon as customers receive a message on Messenger, they can reply and ask questions which will be answered by a professional agent. Agents are able to access the entire conversation history. This way, they can provide customers with the most personalised and contextualised answers. This is a good example of the multiple opportunities offered by conversational commerce when bots and human intelligence are combined.

Artificial intelligence is a key issue for iAdvize. We are constantly trying to facilitate the work of our users. That is why we have been working on a technology of intelligent answers. Thanks to this technology, we will soon be able to suggest, in real-time, increasingly relevant answers, adapted to the questions, contexts, profiles and issues of visitors. How? Artificial intelligence will collect all conversations in the panel and analyze the most frequent situations encountered by agents.

This technology is called Genius Answers. Over 50 of our customers already use it. Genius Answers provides agents with answers adapted to the visitors’ questions.

We are in the first stages of the implantation of chatbots in conversational commerce. But Facebook’s move at the F8 is certainly an important one. Now, brands can offer customer service that combines chatbots, artificial intelligence and human support to more than 900 million users worldwide. iAdvize wants to enable each and every brand to benefit from this combination by connecting their bots to the iAdvize platform. 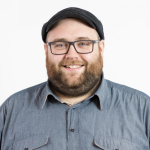 This author does not have any more posts.

[…] the banking and telecommunication industries, sectors where customer interactions are very common, chatbots will help cut down costs. To avoid any frustrations, Forrester advises brands to find a balance […]