Real-time engagement: respond to your customers or face the consequences

Being present and responsive on social media is extremely important! There are a lot of active social media users around the world… and active means they won’t hesitate to complain if they are not satisfied! According to Search Engine Watch, in 2014, consumers complained about brands 879 million times on social media. On Twitter more specifically, 70% of Twitter users expect a response from brands they reach out to. When they are issuing a complaint, 72% of them want a response within less than an hour. Although though quick response times are expected by social media users, this does not yet mean that brands have caught on. In fact, in 2015, 7 in 8 messages to brands on Social Media were still unanswered 72 hours later. Discover how social media listening and social customer service could help answer your visitors on the right channel within the timeframe they expect. And remember, if you don’t answer your customers’ questions, your competitors will be glad to do it for you. Things go very quickly on social media, make sure you get up to speed! ;)

A recent Comscore report found that with a market penetration of 32.9%, Snapchat is the third most popular social app among 18-34 year-olds. Now, more than ever, your audience wants entertaining content, especially the Millennials. Young consumers are obsessed with micro-videos and gifs as a form of expression. That’s why social media is constantly changing and thinking about the next big innovation that could attract users, with Millennials as the most demanding audience. Young consumers feel that emojis are more expressive than text. Therefore, in 2015, Facebook Messenger added Gif Apps to enable this form of communication. It’s not the only social network to have understood this demand. Google and Twitter are also competing to provide the best video and gif tools. Facebook also expect to boost social engagement with their 360 degree videos.

“I think video, moving into 360 and trying to be trend setters, that’s going to happen on Facebook. It’s not going to happen on YouTube, and I think that’s the other reason why it’ll be Facebook’s year when it comes to video,” said Adobe Social’s Carmen Sutter

And what about live-streaming? The use of apps like Meerkat or Periscope is booming. Let’s remember that 40 years worth of live video is watched daily on Periscope and that the app is already available in 25 languages. Why is it so popular? It’s unfiltered and therefore, shows an authentic part of your business. In fact, it’s so popular that it will play a big role in the 2016 US Presidential elections.

The fact that we now use all these kind of media to interact could completely change the customer journey as we now know it today.

After eCommerce and mCommerce, Social Commerce is finally emerging! Social Commerce has been announced for quite some time like the next big social media trend. But here is how users responded to it over time:

Social Commerce refers to the role social media can play in online purchases. Internet users have been taking their time to get used to the idea but now it’s time! Indeed, buy buttons are invading social networks like Facebook, Twitter or Instagram. Via buying buttons, you can directly make a purchase from a tweet, an Instagram picture or a Facebook page. It’s a game changer for brands, especially on social media platforms like Pinterest. Like Instagram, Pinterest is a gold mine for retailers. It could have a huge impact on Social Commerce. Buying something from a pin directly from the platform instead of going through the entire checkout process on a website changes everything! That’s why, in 2015, Facebook and Pinterest have introduced buying buttons for their advertisers and users. Their mobile users can purchase a product on a sponsored post in a few clicks. They don’t even have to leave the Social Media app!

I think by the end of 2016 we won’t think twice about buying something from a Facebook page,”Adobe Social’s Carmen Sutter said.

Read more: Social Media is having a big impact on the evolution of customer service

Mobile: there is no way out of it!

There are approximately 2.6 billion smartphone users worldwide. For most social media users, mobile devices were the primary screen on which they checked their accounts in 2015! You have no choice but to have a mobile strategy especially if you are targetting Millennials. Indeed, they can’t live without their phones… 87% of them admitted to never being without their smartphone. Oh and in case you were wondering, 14% of them said they wouldn’t do business with a company that doesn’t have a mobile site or app.

So yes, having a mobile strategy is extremely important, but it is even more important to integrate it to your social media strategy and online customer service strategy. Why? Have you heard of Messaging apps? You know Whatsapp, Facebook Messenger etc. Well they now have the same user-base as the top 4 social platforms. 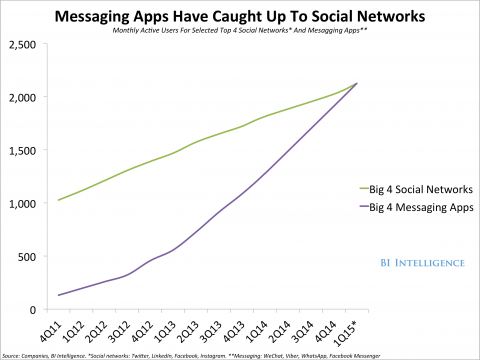 Messaging apps are another useful tool you can add to your online strategy! You create a stronger bond with your customers. It could completely transform the customer journey just like emojis. I think it’s safe to say that in a few years we won’t recognize customer journey as we know it today. Facebook Messenger and Whatsapp are already disrupting online customer service. Take the partnership between Facebook Messenger and Uber for example. It enables customers to hail a ride through the mobile app! Nothing else is required, you just have to be on your Facebook Messenger app. And it’s not the only idea that Facebook has to disrupt online customer service. They are also experimenting with “M”, the human side of a “chatbot” to help consumers with personalized needs.

What are you waiting for?

Want to engage in real-time with your customers and prospects on social media? iAdvize Social is for you!