Home > Ecommerce > Home improvement: what must brands remember about the DIY trend 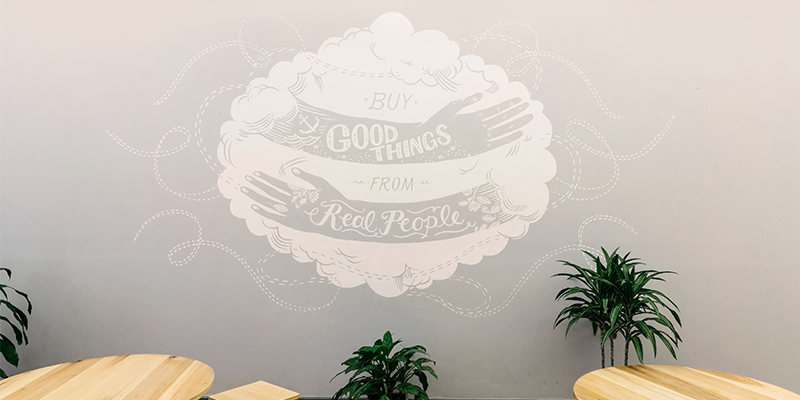 Today, there are fab labs (fabrication laboratories), located from districts to marketplaces, dedicated to do-it-yourselfers who are a little more experimented than amateurs. The DIY concept reshapes the market of specialised dealers in DIY, gardening and decoration. Influent blogs are dedicated to the subject. Last year only, the US DIY industry brought 338.6 billion dollars in the economy (Statista, 2015).

DIY or Do It Yourself advocates for a return to the source: homemade objects. If some people make a connection between this trend and the context of financial crisis – doing it yourself primarily means saving money. In reality, this trend has already been around for more than fifteen years. Here are a few examples throughout the years: Just Do It from Nike, the IKEA flat-pack furniture, or Coca Cola that offered consumers the option to personalise their soda cans with their first names.

Hobby Industry Association claims that 76% American households contain at least one family member who does craft activities for an average of 7.5 hours each week. The most popular activities are cooking, bakery, DIY and decoration.

It is difficult to put together an accurate DIY consumer profile. DIYers are not just housewives trying to save money. They are buyers from multiple generations, incomes and geographical regions. They are savvy customers looking for a tailored experience. They look for unique and high-quality products. In 2015, nearly 40% of Americans considered starting a DIY project. According to Google, 65% of Do-It-Yourselfers are more likely to buy from a brand which provides videos for their DIY project.

Influencers and blogosphere, the DIY trends you should follow

First introduced as a counter culture movement, DIY challenges the market system with the principle of doing things yourself. Today, DIY is creating its own broadcast channels. Key players of the industry have understood the importance of this trend and now integrate it in their marketing strategy: for example they partner with influent bloggers. In 2011, IKEA organised a pyjama party in a UK store for 100 Facebook fans. In March 2016, they repeated the operation in France with twenty women, all faithful blog readers. During this event, French blog influencers hosted three Do It Yourself workshops and gained useful visibility.

Tutorials, contests, inspirations, lifestyle content and bloggers are the first source of inspiration for DIY beginners. In 2013, Opinion Way identified more than 550,000 DIY blogs on the Web. Bloggers were amongst the first to have grasped the importance of conversations: we primarily measure bloggers’ influence by the number of comments generated by posts.

DIY marketplaces gather independent creators who have multiplied as the DIY movement gained momentum. Using these marketplaces, enthusiasts sell their own homemade creations. In 10 years, Etsy has become a reference point for the DIY industry. It has 24 million active buyers and 1.6 million sellers. In 2015, the platform announced a $2.39 billion turnover.

Etsy recommends sellers on their website and makes customer service a key element of its success. The marketplace encourages the development of communication, responsiveness, honesty and uniqueness. The company’s purpose is to invest in a human relation with their buyers, putting their shared passion at the heart of their conversations. In 2015, Etsy announced opening ten pop-up stores in France in order to win online loyalty of customers coming to pop-up stores. And in 2016, they opened their first physical store with Macy’s in New York. This is a good example of great permeability in the home improvement sector between online and offline.

Hi Ludivine, I’m an Italian student and I want to focus my master dissertation on the evolution of DIY in America and Europe. I’m struggling to find concrete numbers about American Diyers…The source “Hobby Industry Association” that you mentioned can be very precious to me, but I can’t find the original report.
Can you please help me? It would be very very appreciated!

Thank you in advance, E.