Home > iAdvize News > Conclusion on Conversation 2018: an event dedicated to the conversational economy 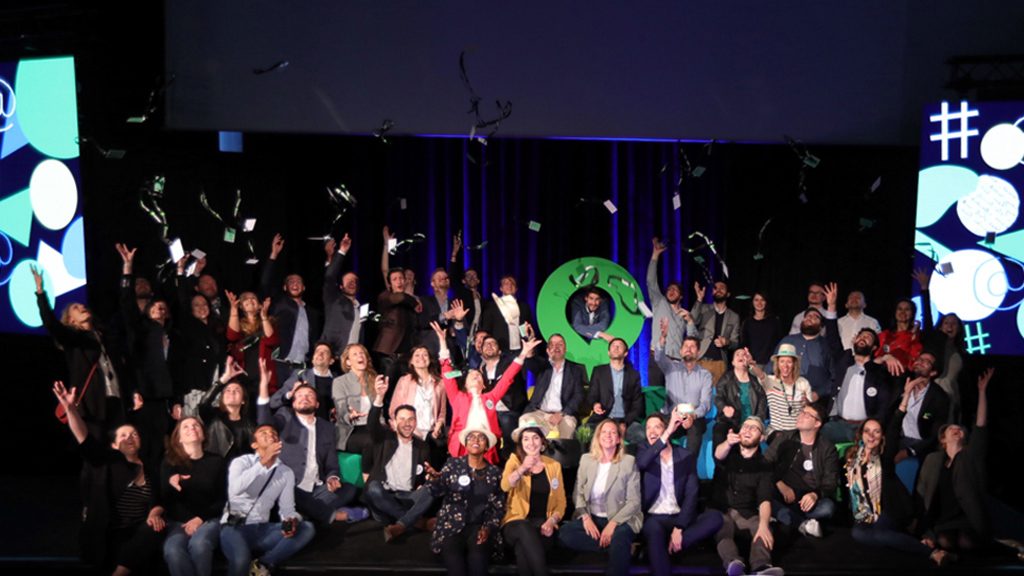 Last month iAdvize hosted Conversation an event which brought together some of the largest European retailers and pioneers across the conversational marketing space. This year, there were more than 300 attendees. Speakers from France, the United-States, the United-Kingdom and Italy came to tell their stories and share their vision of the future of marketing and the online customer experience. Some of their names? Ben Williams from Adblock Plus; Alexandre Lebrun from Facebook, Laure Wagner from Blablacar or Enrico Plateo from WeChat. Let’s take a look back at some of the highlights from the day.

“Messaging is all about emotion and experience and not about technique.”
Julien Hervouët, CEO of iAdvize

A first encounter with Enrico Plateo, Business Development Manager Europe for Tencent, helped us understand the challenges encountered by WeChat on the Chinese market but that’s not all.

• There are 1 million transactions per minute through WeChat Pay.

“It is really important to put users at the heart of the experience. They feel valued when you exchange content with them in both the physical and digital world.”
Enrico Plateo, Business Development Manager Europe for Tencent

Differences between the Chinese and European markets but common needs

According to Enrico Plateo, the shopping experience happen on mobile devices in China. The Chinese users are way more accustomed to credit cards and digital payments than the Europeans like Italians who still mainly use the physical currency.

The Business Development Manager Europe from Tencent believes you need to connect the digital and physical worlds to create an optimal shopping experience with, for example, wall experiences in physical shops allowing visitors to interact directly with the content.

The perfect conversational marketing experience using WeChat according to him? Pictures from soccer fans broadcasted throughout the stadium during a game. In other words, users providing and creating pieces of content!
And how can you provide users with quick answers? Combining chatbot responsiveness with human experience.

Conference 2 – Messaging and methods to reach even ad-blocking users

Ben Wiliams from Ad Block Plus revealed the reasons why Internet users massively block online ads: it is annoying, intrusive, it disturbs their browsing, it makes users concerned about their security and it increases the loading time of web pages.

What should you remember from this inspiration …? Ad-blocking users are valuable!

“The notions of brand and conversation are interrelated”.
Maxime Garrigues from X-Prime

“Word of mouth is becoming a key element of the experience and it’s an entry point into conversational marketing for a brand.”
Emmanuel Marill from AirBnB

• VirtuOz, there were already chatbots for customer service in 2002

• In 10 years from now, computer vision issues will be solved by AI

What should you remember from our meeting with Alexandre LeBrun from Facebook Artificial Intelligence Research?

– Artificial intelligence can be defined as the latest advancement in computer science.
– Autonomous conversations with a machine are not a reality yet, it’s still part of the science fiction world at the moment.
– You musn’t and cannot replace the emotional part of a conversation between two people.

Sébastien Montaz, filmmaker, athlete and innovator transported us into his world by showing us some of his techniques to create innovative and conversational pieces of content while being creative!

• 300 kilometers is the average length of a BlaBlacar carpool journey

BlaBlacar’s new logo includes quotation marks to represent conversations which is at the heart of the brand’s core principles.

“The power of the BlaBlacar corporate culture? Transparency and communication for a team heading in the same direction!”
Laure Wagner, BlaBlacar’s first employee and spokesperson

Conference 7 – Conversations at the heart of team engagement and management

Workplace was born from an observation: there are not enough rich conversations within companies. Even Facebook employees have adopted Facebook to communicate with one another.

Workplace allows the silent majority to have a voice according to Nicolas Farin, development manager for Workplace. He also told us that sometimes, a gif is worth a thousand words!

“Renault Retail Group is a good example of how Workplace should be used. The group has decided to use Workplace in order for all employees to remain in contact. The announcement of the tool’s launch was made live at the Auto Show.”
Nicolas Farin, development manager for Workplace

Conference 8 – The role of chatbots in customer acquisition and retention?

On May, 17, Xavier de Baillenx from Meetic announced the launch of Lara, the dating bot on Google Home! This chatbot allows the Meetic group to significantly increase its acquisition rate.

“Some people prefer classical registration forms others conversations with a bot, you need to provide your users with both.”
Xavier de Baillenx, innovation lead for the Meetic group

Djamel Mostefa also participated in this conversation about bots and revealed that Orange Bank has an objective to reach 80% of conversations solely handled by its virtual assistant Djingo to reduce costs and keep up with the bank’s growth ambitions.

“Orange Bank is a disruptive bank which has created an innovative service, Djingo, the virtual assistant. Our objective? 2 million users and 24/7 support which is impossible to handle with a service solely composed of human agents.”
Djamel Mostefa, responsible for the R&D and innovation services for Orange Bank

Conference 9 – Chloé Beauvallet: from Canal+ to BNP Paribas, a journey at the service of the customer

“Customer servie is not just a team sitting in an office down the hall”.
Chloé Beauvallet, Customer Marketing Director, Partners in Action for Customer Experience, BNP Paribas

“The most important thing to remember in customer service is that customer service agents can amaze or disappoint customers in less than 3 minutes.”
Chloé Beauvallet, Customer Marketing Director, Partners in Action for Customer Experience, BNP Paribas

A huge thanks to all the attendees and speakers and see you next year for a third edition!
Find below the summary video of this second edition of Conversation:

P.S. Join us at our conversation breakfast: